The crew takes it to the 'Tude

Posted by Clint Gardner at 8:32 PM No comments: 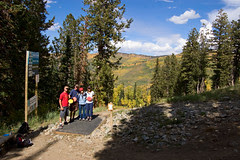 Wilhelm Disc Golf Invitational 2008: Ready to Throw
Originally uploaded by Theorris
The Croin, LateJC, Hopabout, and Molly steel themsevles to enjoy a fine day of disc golfing at Solitude Mountain Resort. I received a few calls mid-course from invitees wondering if we were actually going to have the tournament. As if. Slackers.
Posted by Clint Gardner at 12:15 PM No comments: 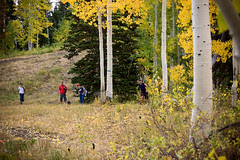 Wilhelm Disc Golf Invitational 2008: Lower Northstar
Originally uploaded by Theorris
Here Catinlap takes his second throw from mid-range. He landed fairly near the basket. He had 2 birdies. This, I believe, sets a Wilhelm Invitational record.
Posted by Clint Gardner at 12:14 PM No comments: 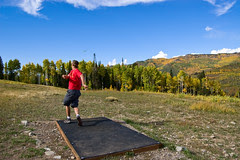 Wilhelm Disc Golf Invitational 2008: The Croin throws the Hippy
Originally uploaded by Theorris
The Croin took up using his favorite disc, "The Hippy," despite its colors. It is rather easy to lose discs of such a color scheme, you see.
Posted by Clint Gardner at 12:14 PM No comments: 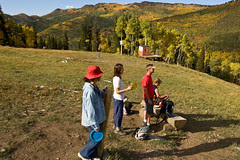 Wilhelm Disc Golf Invitational 2008: Mainstreet
Originally uploaded by Theorris
Here the crew ponders the final 1,219 hole. A good day was had by all. I ended up with a 75 because of a disruptive family who turned my par chance on Mainstreet into a triple bogie. Blah!
Posted by Clint Gardner at 12:13 PM No comments:

We've actually had a great disc golfing summer, but have been very bad about updating our activities. I shall remedy that as soon as possible.
Posted by Clint Gardner at 8:47 PM No comments:

Disc golf fun at all hours day or night � RapidCityJournal.com

This event sounds kind-of fun, although I am very uncertain what a glow stick will do to the aerodynamics of a disc:

"Disc golfers will play a round in the daylight and a round at night. During the daylight round, golfers will be allowed to play according to the normal rules. The night portion of the tournament makes it unique, said Teresa O’Connell, who is organizing the event with the help of John Anderson, Brenda Bure and the Black Hills Disc Golf Confederacy." (Disc golf fun at all hours day or night � RapidCityJournal.com)

I think it would be much better if the did what Team Wilhelm tried a couple of years ago with such a nighttime outing: painting the discs with glow-in-the-dark paint. You had to recharge the disc before each throw and go find it quickly, but it did work to some extent.
Posted by Clint Gardner at 7:47 AM No comments:

The crew takes it to the 'Tude

Now that's how its done!

Posted by Clint Gardner at 5:21 PM No comments:

Woe and Intrigue on the 4th of July

It was a rough front 9 yesterday for the Wilhelm team at the Independence Day face off held at Solitude Mountain. A botched start left Theorris with 5 on the first hole, and it went down hill from there. One hole 2, both Catinlap and Theorris managed to get stuck in the same tree, even though it looked like the discs had flown into the woods. After 20 minutes of searching, and officially giving up, Catinlap looked up and there the discs were--both in the same tree: 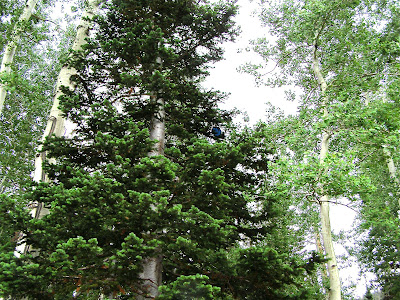 After 20 minutes of throwing logs and rocks and a failed attempt to climb, both discs were retrieved and play resumed. It did not resume well, however, as Catinlap smacked trees on two throws in hole 3, and Theorris, although recovering well from the tree mishap, with a very good throw on hole 3, managed to turn that good placement into another double bogie through poor putting.

Things turned around remarkably on the back 9, as Catinlap consistently threw par, and Theorris broke the double bogie rule, and actually had several pars. Theorris also had several excellent shots, and managed to par the longest, flatest hole on the course, hole 14: The Flats. This was a first in Wilhelm Team history where this hole was terminally considered to be an impossible par 3. Hole 14 has been named both the "Bane Hole" and "The Long Ass Hole." Theorris used his superlight Valkerie to accomplish his outstanding achievement. 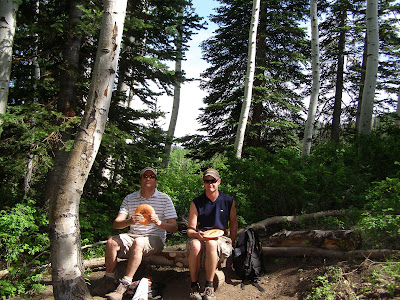 Things did not finish up well for Theorris, as he lost his least-favorite disc into the grassy maw of hole 18. "I hated that disc any way," Theorris sad of the Solitude signature Innova Wraith. "It cut way too hard to the right and absolutely no legs."

Posted by Clint Gardner at 8:52 AM No comments: 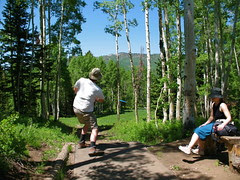 TheOrris lets her fly.
Originally uploaded by catinlap
Well Solitude Mountain Resort is finally open for the season. There were skiffs of snow here and there, but the conditions were excellent in that it was not too over-grown yet.

I actually had a pretty solid game. With no major screw-ups. Now, of course, double bogies may be considered massive screw ups for some, but not I. I actually broke 80. That usually takes me a few trips up. For whatever reason I was feeling quite confident yesterday, and threw well. I only throw "flick" style--or sidearm, given I have a very wonky shoulder that tends to fly out of its socket when I throw back hand. I'm getting some pretty good distance too. I thank my disks for that.

Now as for the others, June Bug is improving, although I think she gets discouraged. I'm trying to convince her to give up back hand all together and go with the flick. She does much better throwing sidearm.

Catinlap and the Croin battled it out on the front 9, ending up tied. The Croin, however, had a run of bad luck, and fell behind by 3 strokes. Both, still kick my ass at putting and approach shots, but I consistently beat them on distance. BOO YEAH!

Great day, in all. Invigorating as always. I'm looking forward to an excellent season.

The 2008 Mountain Disc Golf Season starts tomorrow at Solitude for us here at the Wilhelm! Exciting! Solitude opened this past Wednesday, but a little thing called work got in the way for all the Wilhelm inmates.
Posted by Clint Gardner at 4:27 PM No comments: 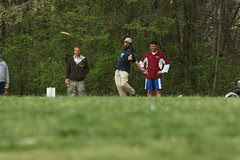 IMG_9743
Originally uploaded by Scott's Snap-Shots
Posted by Catinlap at 6:02 PM No comments:

A photograph of mine has been used by the Salt Lake City Weekly in their article "Disc-y Business: a disc golf guide". The subject of the photo is Catinlap hucking (flipping they say) his disc at Solitude. The article is pretty decent--a tad hipsterish, but that's to be expect from the City Weekly.

Here is the original: 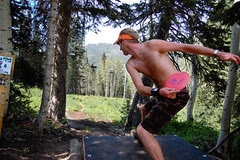 Posted by Clint Gardner at 4:35 PM No comments: 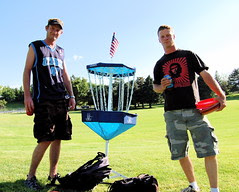 Pose
Originally uploaded by Theorris
I think I'm getting cabin fever. When will we be able to disc golf again?
Posted by Clint Gardner at 11:38 AM No comments: 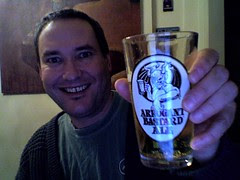