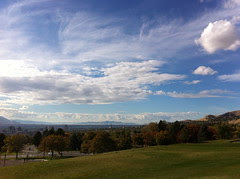 Lovely Day for Disc Golfing
Originally uploaded by Clint Gardner
Catinlap & I headed to the University Disc course for a Halloween chucking fest. I won't comment on my poor performance, but I was 1 off of bogeying every hole.

Victory!
Posted by Clint Gardner at 6:02 PM No comments: 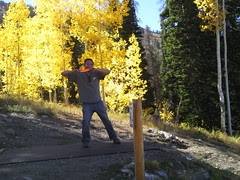 Last Disc Golf at Solitude
Originally uploaded by catinlap
Bah that Solitude closed early this year!
Posted by Clint Gardner at 9:23 AM No comments: 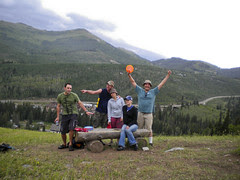 2010 Bone/Kat Disc Golf Invitational
Originally uploaded by Clint Gardner
Despite the fact that it was "Tournament Day!" at Solitude (replete with crass and rude Utah Disc Golf Association members) ex-pats Bone and Kat were in town from their Korean sojourn, so we headed up to get in a round. Bone had played while visiting friends in Flagstaff, Arizona, but otherwise he has had a year off of the sport. He only lost by one throw, however, as Catinlap racked up a birdie on the 14 hole (I think.)
Posted by Clint Gardner at 1:54 PM No comments: 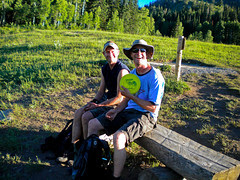 Farewell Wilhelm Disc Golf Invitational: Catinlap & The Croin
Originally uploaded by Clint Gardner
This past weekend, Catinlap, The Croin, and myself headed up to Solitude to play the course one last time with The Croin who is, quite literally, shipping out for parts known to do service for our country. It was not our best effort all the way around, and I managed to lose two my best discs--one swallowed up in a lush wetland and the other sailing off into a ravine. It was time that they were retired anyway.

As The Croin departs into the sunset, we can certainly hope that he will not keep loud celebration swearing at bay, as is requested by disc golf etiquette. Why the hell would you want to do that anyway? If you can't yell and swear in the great outdoors, where in the holy living fuck can you do it?

The Croin has left the building. (Well not quite yet, but I needed a good closing line.)
Posted by Clint Gardner at 9:05 PM No comments:

Now is the Time on Sprockets When We Dance 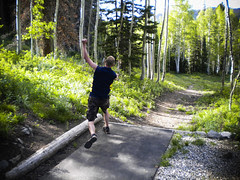 Now is the Time on Sprockets When We Dance
Originally uploaded by Clint Gardner
While it may appear to the untrained eye that Catinlap (q.v. on flickr) is doing some sort of insane Highland jig, or (more amusingly) engaging in an out-of-doors unprotect fencing match with an unseen opponent, he is actually throwing a disc in the official opening of the 2010 disc golf season at Solitude Ski and Summer Resort (http://www.skisolitude.com/).

In the 2010 Season Opening Wilhelm Invitational former Wilhelm inmates Catinlap (pictured), The Croin, and yours truly (Theorris) took on the mighty course on opening day and utterly destroyed their self-esteem. I had a wicked 6 over par that absolutely destroyed my score. Cat and Croin did much better, but were far off their scores from last year. I predict, however, much better performance.

If thou art a disc golfer or would like to be one do thou shoot me an email anon if thou wisht to receive and invitation to the next Wilhelm Invitational. Don't worry--we pretty much invite anyone and pretty much no one has the balls to show up. That's right--I just insulted you people who dis the disc golf. What are you going to do about it? How about we have a throw down--er throw off!

As always, beer is optional, but highly recommended.

Given that I now live at the Fortress of Solitude, I think I shall simply name this season, the Season of Solitude.

Meh. I still prefer the Wilhelm Invitational.
Posted by Clint Gardner at 8:40 PM No comments: 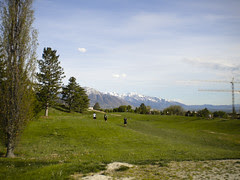 Perfect Day
Originally uploaded by Theorris
Hole 16 on the University of Utah course probably has the best view of any disc golf course I've ever been to. Not even the construction cranes mar it. I've heard rumor that it is going to be taken out. Much of this was spurred by the removal of holes 10 & 11 because of bad placement near a parking lot that borders the course. The wholes appear to be in the process of being moved, so perhaps the rumor is false.
Posted by Clint Gardner at 5:36 PM No comments: 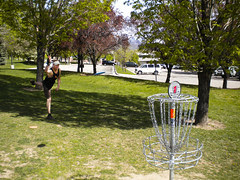 Perfect Putt
Originally uploaded by Theorris
Catinlap and I hit the University Disc Golf Course again today, as did hundreds of other people. It was nice when only a few people knew about it. In any case, play went quickly, despite the number of people. I couldn't get my throw down, and ended up with an atrocious 71. Catinlap pulled exactly the same score as he had the last time we played: 63.
Posted by Clint Gardner at 5:34 PM No comments: 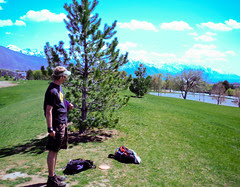 First Disc Golf of 2010
Originally uploaded by Theorris
Catinlap and I took advantage of the beautiful day, and the closeness of the University of Utah's relatively new disc golf course.

I threw a 67. Catinlap (pictured) threw a 63. I was over-throwing the disc during the middle section of the course because I was worried about the wind and being spectacted by others. Stupid mistake. I did manage mostly par on the front 9, but blew it on the back nine. Only 2 pars.
Posted by Clint Gardner at 7:21 PM No comments: